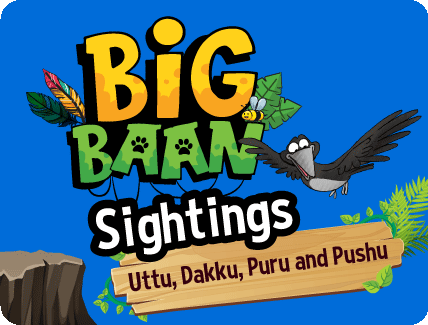 Hello there! My name is Kalia, the resident crow of Big Baan. Once a small forest, Big Baan has now expanded because of an earthquake. Come with me as I introduce you to my new neighbours!

I see four little lizards sunbathing by the watering hole. Aha! They’re Uttu, Dakku, Puru and Pushu, the four monitor lizards of Big Baan. They are Pu’Rani’s stooges and carry her around everywhere on a palanquin. Are they good at their job? Absolutely not! These particular monitor lizards have a poor sense of direction. They never quite know which way to go. Whenever Pu’Rani asks them to take her someplace, each lizard thinks the destination is in a different direction and tries to take the palanquin there. Imagine trying to take a palanquin in four directions at the same time! No wonder they keep dropping Pu’Rani, much to her annoyance.

Uttu, Dakku, Puru and Pushu are Bengal monitor lizards, also known as common Indian monitor lizards. This variety is widely found in India, from forests to deserts. They can tolerate a range of climates but prefer warm areas, since they are cold-blooded and can only be as warm as the weather around them. No wonder our four lizards are sunbathing by the watering hole right now! And since they’re so adaptable, they can take Pu’Rani pretty much anywhere (if they know which way to go).

Bengal monitor lizards are also good runners and tree climbers. Uttu, Dakku, Puru and Pushu certainly do run, especially when Pu’Rani chases them in anger, but you won’t see them climbing any trees soon. Their sense of direction is so bad that I doubt they know which way is up! Bengal monitor lizards are also solitary creatures, which means they prefer being alone. But our foursome like to stick together because if they didn’t, they’d be hopelessly lost!

Through my travels in the forest, I heard opinions from other animals on Uttu, Dakku, Puru and Pushu. Let’s see what they had to say: 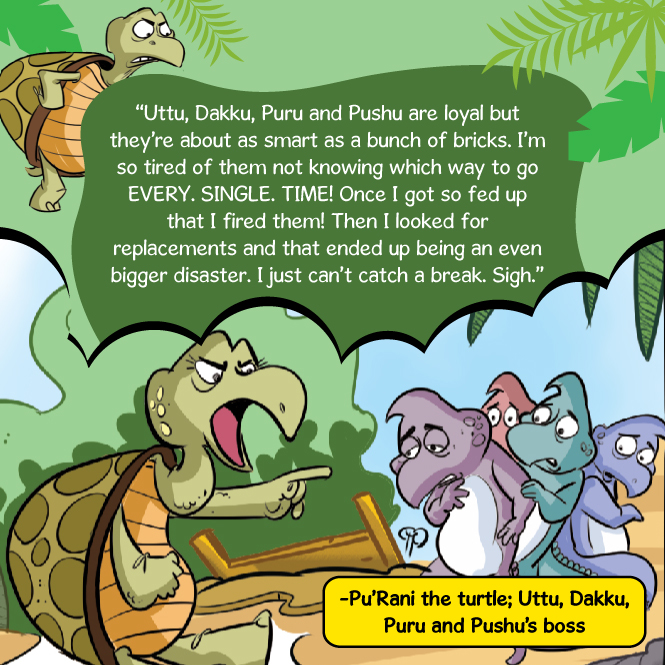 Check out that funny story here. 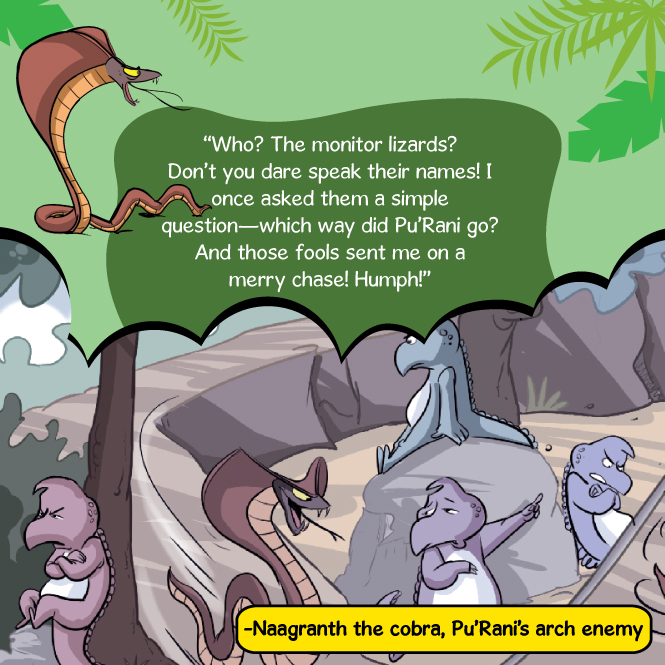 Yikes! You can read all about that adventure here. But who is this Naagranth? Well, that’s a story for another time!