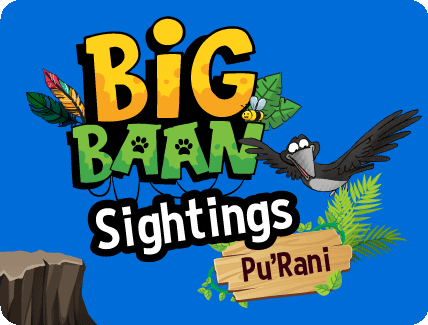 Hello there! My name is Kalia, the resident crow of Big Baan. Once a small forest, Big Baan has now expanded because of an earthquake. Come with me as I introduce you to my new neighbours!

Huh? What is that commotion below? Let’s go down and see. Ohh! Heehee! The queen is in great trouble! Again!

Let me tell you something about this self-proclaimed ‘queen’. She’s Pu’Rani, Big Baan’s Indian black turtle. The earthquake moved her territory closer to Big Baan and she’s claimed the watering hole to be her own. Indian black turtles are found in Bangladesh, Myanmar, India, Sri Lanka, Maldives, and the Chago Islands. But don’t be fooled by the name. Indian black turtles can have upper shells or carapace, in colours ranging from reddish, dark brown to black with yellow streaks. They are medium-sized turtles, measuring between 38 and 45 cm, which is half the height of a cricket bat. Pu’Rani is larger than the others in her species which is why she thinks she’s royalty. Don’t tell her you know the secret!

Pu’Rani loves water but she definitely doesn’t want to miss out on all the fun on land. And if you know her, you would know she hates walking! That is why she’s carried around by four monitor lizards, Uttu, Dakku, Puru, Pushu, on a special palanquin. Except these four monitor lizards have the worst sense of direction! Hence, more often than not, Pu’Rani finds herself falling to the ground. Hahaha!

I see Thod and Phod standing by. Let’s see what they have to say: 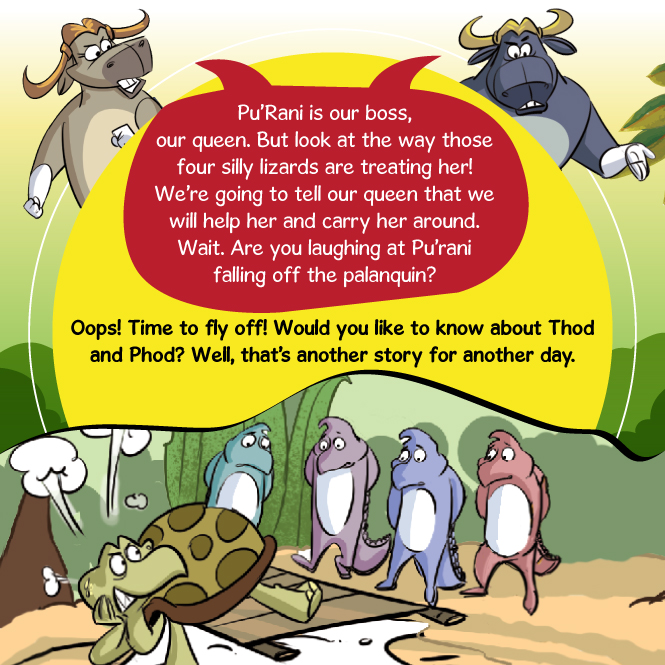