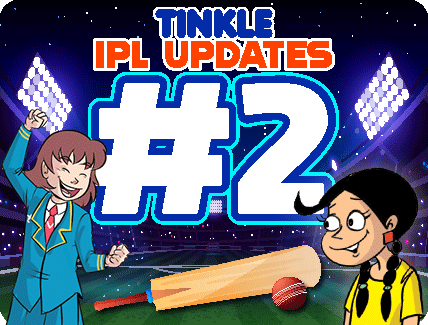 It has now been about a month and the Tata Indian Premier League has gotten people talking, entertained, and excited.

So, what has happened since our last update? We’ll tell you all about it!

The Titans have Risen

The Gujarat Titans (GT) are at the top of the points table! This is a new team this season and is under the captaincy of Hardik Pandya. They have played 6 matches thus far, out of which they have won all but one. This combined with their net run rate (run rate as compared to the opponents) has pushed them to the top. As we had mentioned before, the new teams are turning out to be strong contenders in this IPL!

The Royal Challengers Bangalore (RCB) are in second place on the points table. This team has had its ups and downs, and determined supporters who have stayed with it throughout these. This season, under the captaincy of Faf du Plessis, RCB is giving its fans what they came to see. Out of the 7 matched they have played, they have won 5 (the same number of wins as the Gujarat Titans, but a slightly lower net run rate).

MS Dhoni: This season, the Chennai Super Kings have been having a tough time securing wins. On Thursday though, playing against the Mumbai Indians (MI), MS Dhoni helped CSK bag their second win. He displayed his batting prowess, getting 28 runs in 18 deliveries and also contributed to Keiron Pollard’s dismissal through changes in the placement on the field.

Now get back to watching the IPL with your family and friends, and stay tuned here for bi-monthly updates!