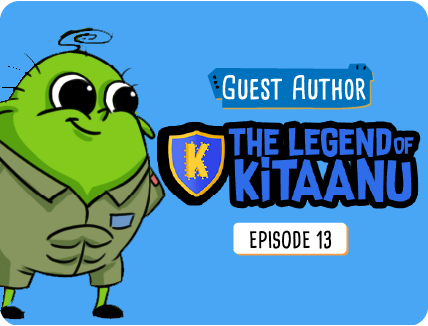 If you’re not familiar with the story so far, start here, at the beginning of the series. In Chapter 12, Kitaanu successfully fought off the invading bacteria. Read on to find out what happens next.

Heading the boffin team of new recruits, Rogaanu had arrived to do ground research on antibiotics. He and Kitaanu hugged each other. It had been days since they left the clean palace for their individual duties.

“You are growing handsome with each passing day, Rogaanu. And is that vanilla fragrance? Yikes! It is horrible.”

Rogaanu grinned. He had a habit of spraying sweet perfumes on his secret diary. It made sure nobody touched it. Stealing was a far cry since the smell was unmissable. He scribbled notes, observations and ideas in it. And even carried it in a sling bag, wherever he went.

“Have you been working out? I can see a six pack now,” teased Rogaanu and mock-punched his friend.

Ducking out of the way, Kitaanu said, “We are not the same height now, are we? I am taller.”

“I am sharper,” Rogaanu replied playfully.

“And so are your goggles. I’ll have them approved by the state. I tested them today. The mission wrapped up earlier than expected.”

“Good to know.” Rogaanu looked shifty as he said that.

“Tell me, what secret do you have on your wings? Your antennae shake rarely.” Kitaanu gently patted him on the back, while offering him sweet blood juice.

Rogaanu cleared his throat. “I have news. The planning for your coronation ceremony is in full swing. By the time we fly back, the preparations will be done.”

A large podium had been erected in the middle of the road leading to the palace. Decorations were posh—mounds of mud, decaying leaves, dull buntings all around. Banners wishing the Maharaja a long life were hung on every crossroad.

The crowd majorly consisted of mosquitoes and ladybugs. The elite fireflies, led by Soupakki, settled on the muddiest surfaces. The sulky termites—who had been sprayed out of action by Yatoosh weeks ago—were the least in number. None of the neighbouring kingdoms’ rulers had been invited. There seemed to be no foreign presence at all.

The attendees were being showered with fresh water from the sewage, and all insects had turned out in their dirtiest best clothes. Stalls set up in all corners were selling human blood juice bottles, wood rolls, soiled flowers, rotten fruits, pollen tarts and spores cake. It all looked very festive.

Maharaja Yatoosh addressed the crowd. “Thank you for joining in the celebrations.”

The crowd went berserk cheering for him. He was their darling king, after all. The Maharaja waggled his antennae in Kitaanu’s direction, “Meet your future king—Kitaanu! He was discovered seven weeks ago, but I decided to keep his existence a secret until he was trained fully.”

Kitaanu bowed his head as a mark of respect.

What happened in the next ten seconds changed the course of Annukulpuram’s history.

Read chapter 14 of The Legend of Kitaanu to find out!