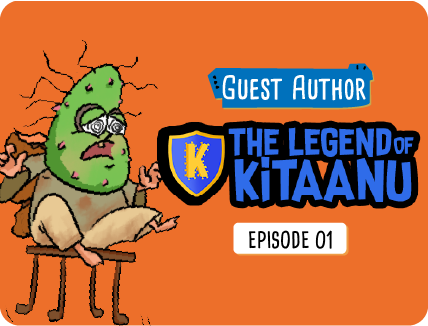 Kirumi, the self-styled soothsayer of Annukkulpuram, felt strange. Suddenly, his head grew into the size of a watermelon, and eyes spun in slow circles. His palms felt itchy. He threw his hands up in the air to get some respite, but in doing so, he fell backwards while still glued to the chair. That lit a bulb. No, not in the dark room, but in his head.

Kirumi knew it was an allergic reaction. His sudden craving had landed him in trouble, yet again. It could only mean that the last man he had bitten, and sucked sweet blood from, had the AB blood group flowing in his veins. To be able to predict a human’s blood type beforehand was impossible. So how could he have guessed the discomfort those fleshy arms would lead to?

But what about that wondrous idea he had thought up a few minutes back? He could not afford to be wrong.

Annukulpuram was home to insects like mosquitoes, bees, ladybugs, termites and fireflies. And Maharaja Yatoosh, the ruler, was a terror. He was feared by adult moskits and juvenile moskids alike. A courtier once wore a sparkly white bandhgala to a meeting. The king ordered him to have a muddy bath. Only when the courtier’s outfit had turned dark brown did Maharaja resume the meeting. Another time, Maharaja Yatoosh had a minister arrested for penning a poem on the beauty of ladybugs. A scientist who had dared to invite some skilled ants for a talk on pheromones was deported to Cheetinagar forever. In Yatoosh’s eyes, no crime was petty; his punishments were swift and merciless.

Grabbing his stained yellow pants, soiled red turban and patchy brown shirt, Kirumi was ready to present his messy self to the Maharaja. Puffy eyes, dark circles and blisters added to his glazed look. It was a law of the land to meet the king in one’s most dirty avatar. The more despicable you looked to the human eye, the more endearing it was to the Maharaja.

Kirumi chanted “He is coming!” over and over again, filling the room with his panic stricken voice. He hoped repeating this one line like a mantra would help him remember it better.

What happens next? Find out in chapter 2 of The Legend of Kitaanu!