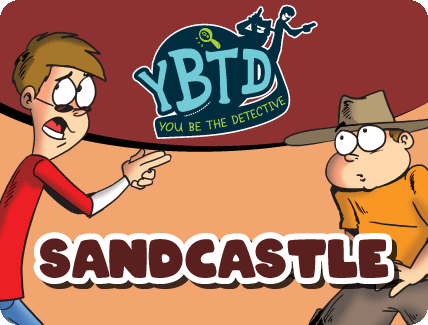 Kaju the cat, Mishti the mouse, Daggu the dog and Gitu the goat were enjoying an evening at the beach. Daggu went for a swim in the sea, Mishti was working tirelessly to build a sandcastle, and Kaju and Gitu were playing with Kaju’s beach ball.

“This is so much fun, Kaju,” said Gitu. “Yes, I’m so glad I bought this ball for the trip! I’m going to play with it the entire time we’re here!” replied Kaju, with a smile.

After their game, Kaju and Gitu helped Mishti put finishing touches to her sandcastle. Mishti’s castle was completed just as Daggu returned from his swim. Mishti proudly showed it off but Daggu wasn’t impressed. “The tide is coming in,” said Daggu. “That castle will be swept away by the sea. Why did you waste your time building it?” Mishti was upset but said nothing.

Kaju tried to cheer her up. “Let’s get something to drink, shall we?” he said and they proceeded to the coconut water stand nearby. “Are you going to carry that ball with you everywhere, Kaju?” teased Daggu. “Leave him alone, Daggu!” squeaked Mishti.

After a refreshing drink, Gitu said, “Hey, do you all want to play a game of hide and seek?” “Yes, that would be fun.You guys go and hide, while I count to 50,” Mishti answered.

After counting to 50, Mishti decided to take another look at her beautiful castle before searching for her friends. But alas, the castle lay in ruins. She shouted out to the others, who emerged from their hiding places to find out what had happened. 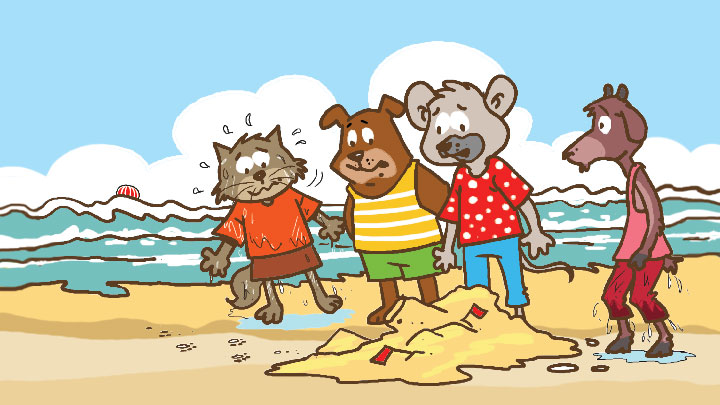 As they took in the scene of devastation, Daggu smirked,“Hah! I told you your castle would be destroyed by the waves.” Looking sad, Kaju said, “Don’t worry, Mishti. We’ll make another one.” “Let’s be realistic, guys. We always knew it was temporary. Let’s move on and enjoy our next game,” Gitu added.

Mishti looked at the ruins and then at her friends’ faces. She knew who was responsible for destroying her castle. Do you?

Hot tip: There might be clues hiding in the illustration too!

Kaju, carrying his new ball, went to hide in the water. But he got swept up by the waves of the rising tide, lost his ball in the sea and came crashing on the beach near the castle. Disoriented, he stumbled onto his feet but walked right into the sandcastle, destroying Mishti’s masterpiece without meaning to.