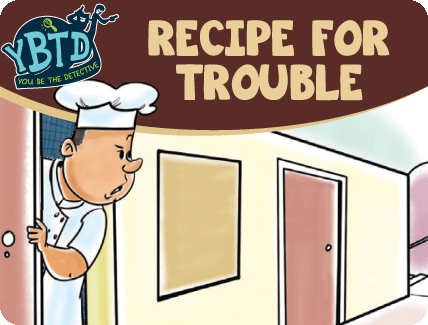 The students of Khaana Hotel Management School were a tensed lot. They were going to have a speed cooking challenge. And the scary part? The ingredients they’d have to use were going to be a surprise!

Rishi sauntered in, sipping some water.

“Hey, champ!” Khaim called out. “All ready to win this challenge?”

Jaz grinned and said,“Yeah, you’re definitely the one to beat in any challenge! But you never know, Kirti won the challenge last week.”

Kirti grinned as she walked into the room and headed to her desk.“Who needs a beating? My whisk is ready!”

The class laughed and then laughed some more as Kirti proceeded to tie her hair up with a kitchen clip.

Kirti shrugged.“I lost my hair clip and this is the next best thing.”

Rishi smiled. “You clown!” Then with a groan, he said,“With all these compliments, you guys are putting the pressure on me to excel every time! Aah!”

A short while earlier, the professors had been discussing the mystery ingredients. “No peanuts, Shetty?” Ms. Braganza had asked.

“I’m allergic to peanuts, Braganza. I love my students but I don’t necessarily want to put my life in danger for them, that too for a test!” Just then, they heard a small thud near the door. 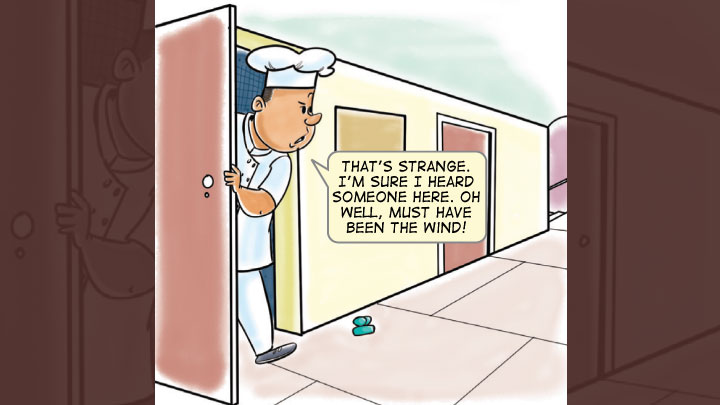 Moments later, the students were asked to come into the testing area. The ingredients they could use were placed in the covered baskets on their desks. Within minutes, the challenge started and the students were rushing about. Jaz hurriedly stirred some almond milk on the stove and threw in some pasta. Lovely aromas arose in the room and soon, time was up and the bell rang.

The students waited in the class for the chefs to taste their dishes and let them know their results. Soon, the chefs walked in and Mr. Shetty’s disappointed voice rang out, “There were some standout dishes but one person used something that was not included in the basket. Rishi, you’re disqualified. I nearly ate your peanut-flavoured chicken skewers. Where did you get the peanut powder, Rishi?”

Rishi looked shocked. “Peanut powder?! Sir, I didn’t use it in my dish! Somebody must’ve added it behind my back!” Mr. Shetty looked at Khaim, whose desk was next to Rishi’s.

Khaim shrugged and said, “Don’t look at me, sir! I didn’t budge from my desk. I had way too many things to do. But I did see Kirti and Jaz around.”

Kirti immediately spoke up in a worried voice, “I went to get the cheese grater from the rack, sir. I wanted to grate the carrots with it.”

“And I went to get a colander from the rack to strain my pasta,” said Jaz defiantly. “Besides, I distinctly remember Rishi saying he was an expert at making chicken satay! That’s full of peanuts!”

Hot tip: Don’t forget to look at the illustration for clues!

The culprit is Kirti. She eavesdropped on the teachers and that’s when she heard about Shetty sir’s peanut allergy. (Did you see her hair clip near the door?) She then dumped peanut powder into Rishi’s dish as she didn’t want him to win.