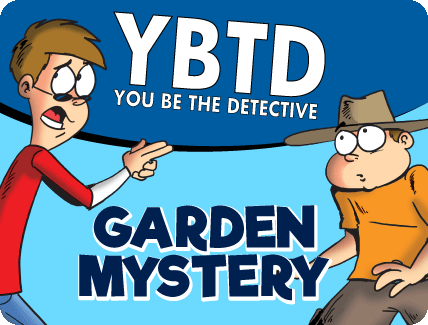 The little town of Banzagarh was bustling with energy. The ‘Best Garden’ competition was going to begin soon. Inspector Mattee was delighted with how beautiful the town looked, when he suddenly received a call.

“Quick, Officer Betty!” he said to his colleague. “Somebody has vandalized Anoop Lancy’s garden! He was sure to win the competition!”

Inspector Mattee and Officer Betty reached Anoop’s house. Anoop showed them the beautiful plants near the wall, which had been cut down. Black paint was splashed across the whole garden. “My gardener was around when the culprit attacked, Inspector,” said a teary-eyed Anoop. Inspector Mattee decided to question the gardener. 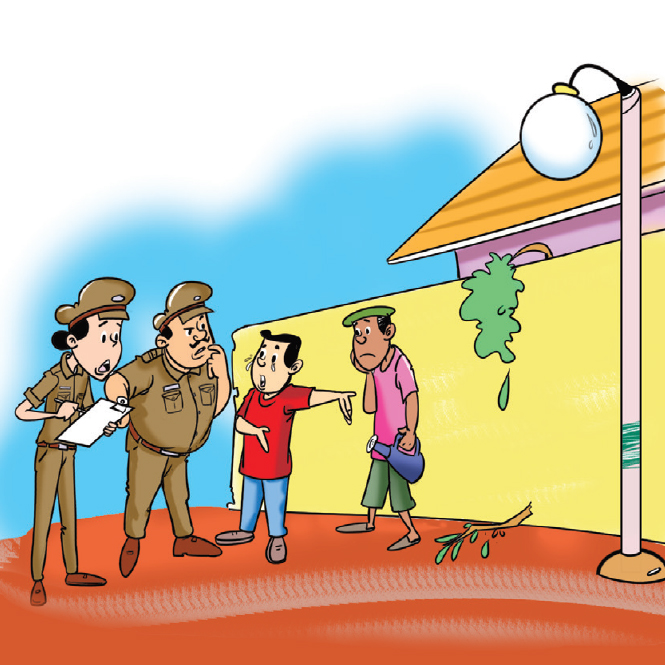 “I had just watered all the plants at the front of the house and had gone to put the tools back in the shed. That’s when I heard the sound of a speeding vehicle. I couldn’t see who it was. I came back to the garden only to find that what was once beautiful was a total mess.”

Inspector Mattee and Officer Betty decided to check the house from outside. They found huge mountain-tyre tracks and a dark green streak on the streetlight pole near the house.

“Officer Betty, we need to look for vehicles with the same tyre marks. It shouldn’t be difficult to find them in our small town,” said Inspector Mattee, with a stern face. Very soon, they found three cars with the same tyre design and called their respective owners.

Kantha’s car was grey in colour and it had a black spray-paint can and a rake in the back. “I just bought the rake and the spray paint to apply finishing touches to my garden. I won the ‘Best Garden’ competition last time and I’m sure I’ll win again!” he told Inspector Mattee, confidently.

Xandy and Ruthee both had dark green cars and their tyres were muddy. Xandy’s car had a streak of paint missing on its left side. She also had a long garden shear in her car. “I’m a landscape architect, Inspector. I’m taking part in the competition for the first time. I hope I win. Then everyone will know that my landscape designs are great and my business will grow!” Xandy told the inspector with hopeful eyes.

Ruthee’s car was spotless except for the mud on its tyres. She had two cans of blue paint, some packets of seeds and a pair of garden shears in her car. When Inspector Mattee asked her why they were in her car, Ruthee replied with wide eyes that she owned a nursery and had bought all these things for it.

Without missing a beat, Inspector Mattee turned to a shocked Xandy and said firmly, “Well, that means you’re under arrest!”

Why do you think Inspector Mattee arrested Xandy?

Answer: Inspector Mattee found the paint of Xandy’s dark green car on the streetlight and also a long streak of paint missing from the car’s left side. She had driven too close to the wall while trying to cut the plants with the garden shears. The tyre tracks were already a match. Xandy wanted to make sure she won and became famous for her landscape artistry.