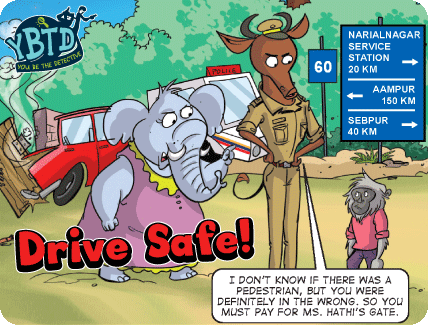 Inspector Nayana Nilgai pulled out her notebook and turned to Lamit Langur. “Tell me once more, in detail, what happened here tonight,”  she said.

“Sure,” said Lamit. “I was driving from Kelapur to Aampur. I left the previous service station 10 minutes ago. I had stopped there for a light dinner and to refill my fuel tank. From there, my drive was relatively smooth and uneventful until I saw someone suddenly run across the  road. I swerved to avoid hitting that person. I ended up hitting the gate of Ms. Hima Hathi’s house.”

Inspector Nilgai now redirected her attention to Hima Hathi, who was standing nearby with a scowl on her face.“I was watching TV, when I heard the engine of a car outside,” she said. “Then there was the sound of tyres squealing followed by a loud BANG! I ran out and saw that a  car had rammed into my gates.” She hesitated but then added, “Look, all I want is for the driver of the car to pay for the damage he’s caused.”

“Don’t blame me!” retorted Lamit Langur. “It’s the fault of that pedestrian who ran across and forced me to swerve o the road. The police  should and that person and hold them responsible!”

“Thank you, that’s enough,” said Inspector Nilgai crisply. She examined the scene of the collision carefully. 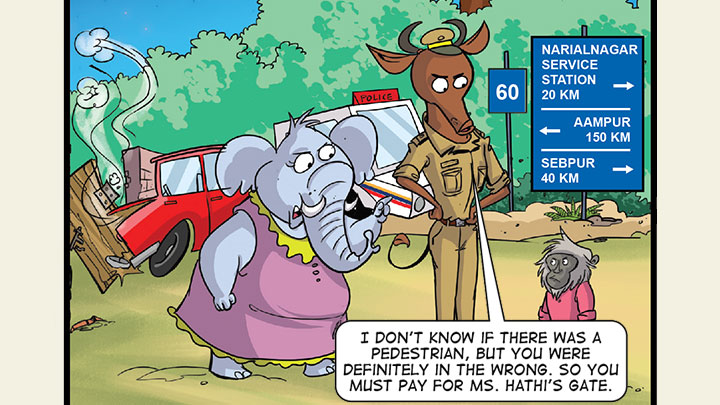 How did Inspector Nayana Nilgai come to this conclusion?

If Lamit Langur was adhering to the speed limit, which was 60 km/hr, he wouldn’t have covered the 20 km from Narialnagar Services and Rest Stop in 10 minutes, but 20 minutes. Therefore, he was speeding, lost control of his car and crashed into Hima Hathi’s gate.