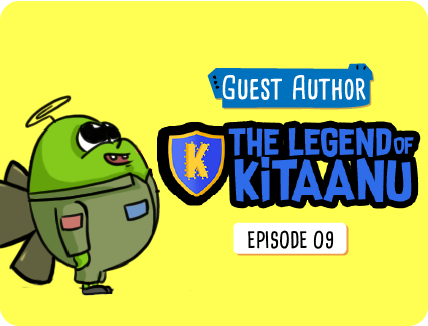 If you’re not familiar with the story so far, start here, at the beginning of the series. In Chapter 8, Kitaanu comes face to face with the Maharaj Yatoosh himself. Read on to find out what happens next.

“You will be the next king of Annukulpuram.” The words made no sense to little Kitaanu.

“Why me, Maharaja? I have never even been chosen as a class monitor,” he said innocently, shocked at what his antennae had caught the king saying.

“You have a secret superpower, my germ boy. You are immune to hand sanitizers.”

Hand sanitizers had a freezing effect on moskits—making them woozy and disoriented—which took a long time to wear off. Kitaanu, on the other hand, had remained alert and energized.

It was good to know the real name of what lay in those containers. Poison to ordinary germs, but to him, it would always be the happy lotion.

A thought popped in his now highly alert mind, and without wasting a second, he blurted out, “What is your superpower, sir?”

“I can withstand mosquito repellent sprays,” the maharaja admitted smugly.

He sat on the sofa, his eyes glossing over with nostalgia. Kitaanu knew a story would unfold any moment, and so it did. Yatoosh started slowly, “Maharaja Machar was one of the friendliest moskits Annukulpuram had seen. So friendly that he disclosed his secret superpower to King Girgit over a ceasefire agreement. The chameleons were a cunning lot. They organized a foolproof plan to kill the Maharaja and attack Annukulpuram immediately after.”

Kitaanu’s eyes were transfixed. He knew Maharaja Yatoosh hated chameleons more than humans. It was an open secret, after all.

“My father was the Maharaja’s chauffeur,” continued Yatoosh. “Maharaj particularly loved and rewarded moskids who behaved respectfully. That fateful day, I hoped to catch the Maharaja as soon as he got out of his car—so that I could bow to him and receive a spicy piece of wood. But just as I neared the car, I saw his guards falling unconscious.”

Kitaanu’s eyes blinked faster than usual and he held his breath, waiting to know what happened next.

“A strange smell was wafting from the bushes. It was the mosquito coil. It took the Maharaja a few seconds to realize what had happened. Before he could raise an alarm, a stream of anti-mosquito spray washed over him. I grabbed his then feeble arm at that precise moment. Thankfully, the smell was not overpowering, since it had diluted under the strong spray. Nothing happened to me. The quick reaction team reached the spot, while the chameleons fled, merging themselves with the surroundings.”

Kitaanu’s eyes almost welled up with tears. So did Yatoosh’s.

“Maharaja Machar knew his end was near but he had sensed my superpower in those five furious minutes. Before I knew it, I was king. I had no time to be the crown prince! I had to learn everything quickly.”

Kitaanu felt relieved to have the luxury of time to be trained as the crown prince. It was a glum realization, but he knew he could not waste another second to prepare for kingship.

Yatoosh continued after a short pause. “The chameleons had prepared for a battle, but our kingdom was ready for a war. They were crushed within hours.”

“Some people whisper that I am brash,” said Maharaj Yatoosh, with a scowl, “But I’m just being careful to avoid the tragedy that befell my predecessor. Seeing the Maharaja die in my moskid arms, I wanted to fight everyone who dared challenge my nation. You are who you are. You have to do what you have to do. But be alert. You wouldn’t want Annukulpuram to lose another king. Maharaja Machar and I were lucky in finding our heirs in a timely manner. You can only afford to be reckless after you find yours.

“Superpowers are to be kept a secret. Remember that,” he warned, almost as an afterthought.

Kitaanu made a mental note, his first one, and it was engraved in his mind in bold but neat letters.

How does Kitaanu adjust to the palace life? Find out in Chapter 10 of The Legend of Kitaanu!