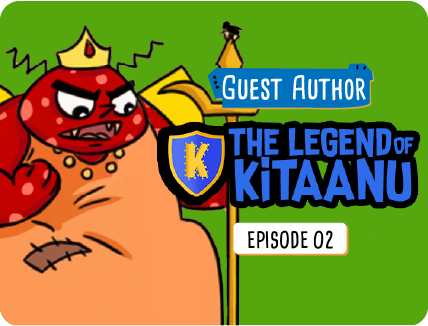 In Chapter 1, Kirumi, the soothsayer of Annukkulpuram, had an urgent matter to discuss with Maharaja Yatoosh. Find out what happens next.

No one would dare stop Kirumi on his way to the palace, for he was granted special access to enter into the premises. Pleasingly filthy, the palace housed greasy corridors, smudged curtains, dusty furniture and grubby bathtubs—with water flown especially from the sewage drains—to suit the Maharaja’s luxurious bathing preferences.

Bright yellow wings, blood red body and yellow, uneven teeth—his aura was awful. With a crown between his zig-zag antennae and a patchy gown, Yatoosh was heading an open durbar—sitting on a heap of garbage, primarily made of fruit and vegetable peels. Humans would have thrown it in the bin, or made a fertilizer out of it all, but not Maharaj Yatoosh. 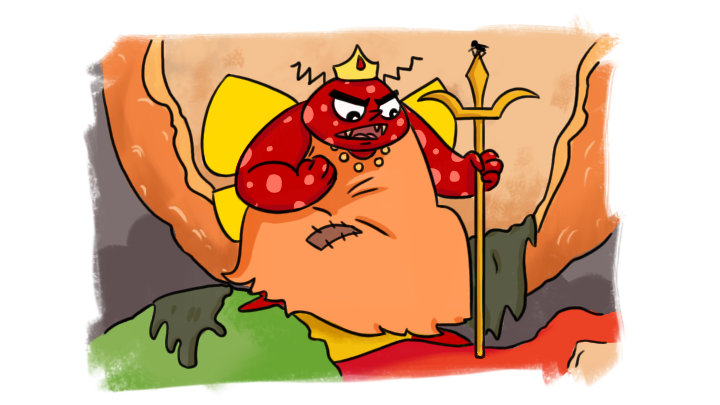 Yatoosh looked irritated. A brave moskit, Captain Keetaku, had encountered a portable travel hand soap, in a flower design tube, while on a human bullet train recce. “The vile ways of humans to dodge us,” Maharaj Yatoosh muttered angrily.

He wanted his army to find ways and means to be smart enough to withstand the portable travel hand soap. A courtier was suggesting a vaccine against it. As he was noting the other courtiers’ responses, flashes of yellow and red caught his attention. Before he knew it, Kirumi had gatecrashed the meeting. The urgency on his face and his panicky eyes spelt trouble.
And then the fool blurted out, yet again—“He is coming, he is coming!”

The courtiers had got their gossip for the day. The news would now spread like communicable diseases did in the human world. They were already mumbling, shaking their unscrubbed heads, and finetuning their greasy ears. Yatoosh glared at Kirumi and with a wave of his hand, signalled the moskits to leave.

They did that, as slowly as they could, hoping to eavesdrop on any new wild guesses the astrologer had in his kitty. Weeks ago, Kirumi had suspected a rise in the price of organic honey in the human kingdom. That made Yatoosh increase taxes on bees flying there. The move only added to the Maharaj’s woes as the human majority switched to jaggery powder. On another occasion, Kirumi had gauged the discontent of termites before it became apparent. He thus predicted widespread protests in the kingdom. Maharaj Yatoosh, though reeling from the previous misfire, decided to take heed and stay alert. He did not regret that. The termites marched on the streets, fighting for more wood in their monthly ration scheme, and were sprayed out of action by Yatoosh’s cavalry. With water and borax powder cannons, of course.

Even though Maharaj Yatoosh wasn’t too fond of Kirumi, the moskit’s words weren’t to be taken lightly. Kirumi was grinning! No bad tidings, it seemed.

“I have glimpsed a sight of your successor,” revealed Kirumi breathlessly. He looked around to make sure nobody was eavesdropping and continued softly, “While on my way to the market this morning, I saw a moskit as tall as you, clothed in similar fashion, flying with a chubby moskid*. For a moment, I thought it was you, on one of your secret kingdom inspections. The chubby moskid looked every inch a crown prince. I realized my folly, when the moskit turned his wings around to enter a building, perhaps the orphanage. This had me speculating. I almost fell off my chair when I later realized that this was nothing less than a vision.”

Maharaj Yatoosh was over the moon! No one around him had seemed responsible or trustworthy enough to be declared the next king. He had long been on the lookout for a capable crown prince and it seemed like his quest was nearing its end. He turned towards Kirumi and requested him to speak to no one else about this. As a token of gratitude, he was awarded a lifetime supply of stale bread and rancid butter.

What happens next? Find out in chapter 3 of The Legend of Kitaanu!

*A moskid is a young moskit