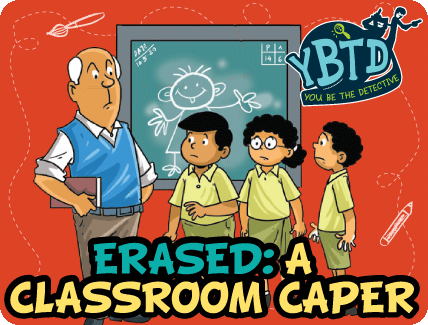 It was the maths period before the break. The period after the break would also be taken by Mr. Gomes, the maths teacher, because the history teacher was absent that day.

Nina and Rizwan were toppers of the class and were both pretty competitive. At the start of the period, Mr. Gomes had given the class a complicated maths problem but only Rizwan was able to solve it. He was asked to write the solution on the blackboard for the others to note down.

At the back of the class, Chetan was doodling out of boredom, while Sheetal seemed worried. 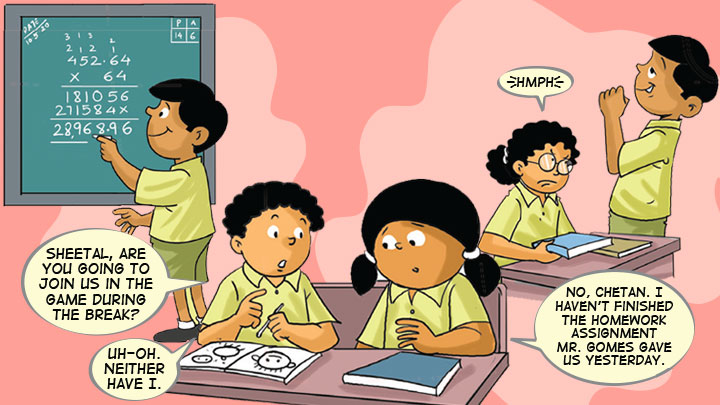 Rizwan had finished writing the solution on the board. He was quite proud of his achievement. As he walked back to his seat, he boasted, “It felt so good solving the problem in front of the class. I wish I could do it again.” Nina was not impressed.

Just then, the bell rang, signalling the end of the period.“The rest of you can copy the solution after the break,” said Mr. Gomes. “Then, I shall check your homework assignments.” The kids quickly packed up and rushed out the door.

When they returned, the blackboard had been erased and the solution to the maths problem had been replaced with a drawing. Mr. Gomes was upset. He pulled up Nina, Chetan and Rizwan, who were the only ones who had been observed near the class during the break. 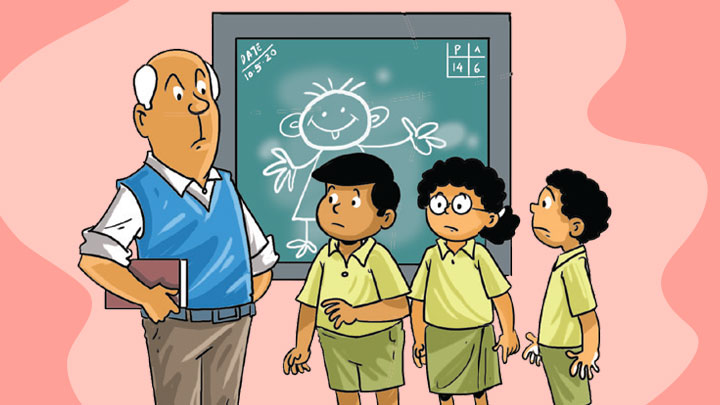 “A friend from the other class returned a book I had lent him. I came back to class to keep it in my bag,” claimed Nina when asked what she was doing in the classroom just a while ago.“It was hard enough watching Rizwan solve the problem one time. Why would I want to watch him do it all over again?”

“I was playing football with the others,” said Chetan.“When I came back to drink some water, I noticed the board had already been erased.”

“Why would I want to erase my own work, Mr. Gomes?” asked Rizwan, flustered.“I returned to the classroom because I forgot my tiffin box. I didn’t do it!”

Who was responsible for erasing the blackboard when no one was watching?

The culprit was none other than Chetan, who had drawn a similar smiley on the blackboard as the one in his notebook. He wanted the solution that had been erased from the blackboard to be written again, so that Mr. Gomes wouldn’t get a chance to check the homework assignment.