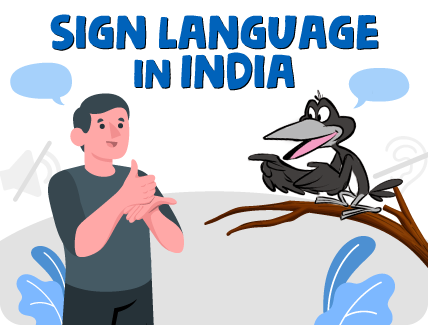 23 September is observed as International Sign Language Day. Let’s take a moment to find out why sign languages are important for the hearing-disabled community in India.

The hearing-disabled community in India

Around 63 lakh people with hearing disabilities live in India. Of these, fewer than 2 per cent are trained in Indian Sign Language (ISL). Almost 98 per cent of hearing-disabled children remain illiterate or drop out of school since they are unable to communicate with their peers and teachers. To combat this, the Indian government passed the Rights of Persons with Disabilities Act in 2016. As per this law, teachers dealing with hearing-disabled children must know sign language.

In India, people have been using a variety of sign languages, including British and American Sign Languages, depending on the country that set up schools here. Along with these, people also use several variations which are influenced by local languages. Therefore, there has been a push to create a standardized form of Indian Sign Language so that people across the country can understand one another and communicate with ease.

The Indian Sign Language Research and Training Centre (ISLRTC), a body set up by the Indian government, is working to standardize ISL. ISLRTC has created a dictionary for ISL which now has 10,000 words for use. Check out the full ISL dictionary here. You can learn a new language and connect with people in the hearing-disabled community.

There is an ongoing effort to have Indian Sign Language be declared as one of India’s official languages to ensure that more Indians are educated about ISL. People with hearing disabilities are as much a part of our society as anyone else, therefore it’s important to be inclusive.

Indian Sign Language should be declared official language, but only taught by Deaf trainers | The Print Opinion