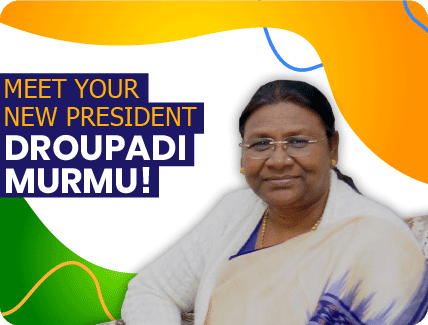 History was made on 21 July, 2022, when Droupadi Murmu was elected as the President of India. She is the first person belonging to a tribal community to become President and the second woman in India to hold the country’s highest office, after Pratibha Patil.

Murmu was also Jharkand’s first female governor in 2015. Hailing from Rairangpur in Odisha, she belongs to the Santhal community. This community can trace its origins to many different regions of India, including Odisha, Bihar, Jharkhand, and West Bengal. Tribal communities have not only faced exclusion under British rule, but have also had their lives disrupted in major ways post independence. Murmu’s election will hopefully bring a decided change to the lack of representation in national matters, which tribal communities have to contend with on a daily basis.

Who is the President?

What Does an Indian President Do?

The President performs a number of functions. Some of the notable ones include:

In short, the president’s office becomes an important position within the government that is supposed to provide an unbiased system of checks and balances for the legislature.

Who Elects the President in India?

Elected members of the

Each President serves a term of five years.

After taking the oath of office on 25 July, Droupadi Murmu declared her intention of working for the well-being of underserved communities in India. She also addressed the youth of the nation and highlighted their importance in the future of India, declaring that she would provide her “full support” to them.

Who elects the President of India? | Business Insider India

Explained: How is the President of India elected – India News (indiatoday.in)