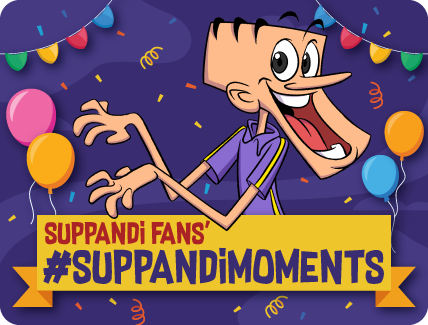 One of the best gifts Suppandi received on his birthday this year were the overwhelming number of readers sharing their #SuppandiMoments. He always feels better knowing he’s not the only goofball around. Here are some of the hilarious #SuppandiMoments that readers have shared.

“I had been wearing spectacles for almost eight years before my first trial with contact lenses. When I tried contact lenses for the first time, it felt like the power in my eyes had increased all of a sudden and it frightened me. It took me a while to realize that it was because I was wearing the contacts and specs together. 😂” – Monisha Gangasri

“I do have a Suppandi Moment but it it is understood only in my mother tongue, Telugu. Once I was told that my maternal grandmother’s house was being painted. In Telugu, it is told as ‘vallu sunnalu vesukuntunnaru intiki’. ‘Sunna‘ also means ‘zero’ in Telugu, and I first misunderstood it, and imagined that they were painting zeroes on the walls of their houses. We had a good laugh over it!” – Dhanyata Syrigapu

“When my sister asked for her glasses, I went and brought a glass of water for her. 😂😂” – R. Mukund

“Once when I was small, I was at home with my dad, when my mom, who was at work, called. I answered the phone and we spoke for a few minutes before she told me to hang up the phone. I took a chair and stood upon it to hang the phone up somewhere high. My dad was awestruck!” – Paavani Kulkarni

“When I was pretty young, we learnt about healthy foods to eat that are rich in iron. After class, l tried using a magnet to check if I had been eating iron-rich foods or not.” – Rida Fatima

“Once, when my mother was rushing to work, she asked me for her keys without realizing that she had them in her hand!” – Tanisha Rao

“My mother once took me to the bus stop to wait for the school bus before she realized that it was a holiday that day.” – Rayhan

“I once wanted pink highlights for my long hair but ended up applying nail polish instead of hair colour! My mom was shocked!” – Anishka Asthana

“I once ran into my friend at the temple and asked him what he was doing there. He told me that he was obviously there to pray.” – Deepthi Satish

“Once, I ended up eating all the food because I though my mother had instructed me to do so. She had actually asked me to only heat the food. 😂” – Shiven

“Mom once asked me to bring in the washing from the clothes line. I happily did so and even folded all the clothes. It hadn’t bothered me that some of the clothes were still wet. I got a good scolding from my mother.” – Anantha Krishna

“Once I was asked to get milk from my grandma’s house, but I got so distracted that I got ghee instead!” – Lakshya Ahuja

“I was told to bring the bouy (floating wheel) from the water, but I ended up bringing back a boy, who was swimming in the water, instead.” – Fatema Shabbir

“When I was asked to open Google.com on my browser, I typed Google dot com, instead.” – Myra

If you have had a #SuppandiMoment happen to you or someone you know, share with us via our social channels on Facebook, Twitter or Instagram. Make sure you use the hashtags #SuppandiMoment and #HappyBirthdaySuppandi. Don’t forget to tag @tinklecomicsstudio as well!