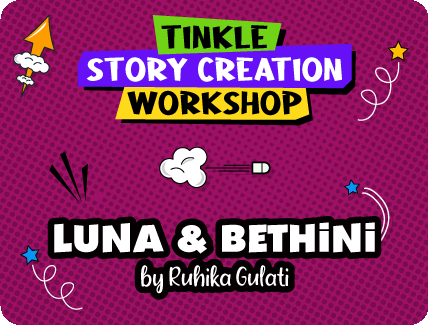 Many years ago, there lived two friends, Luna and Bethini. One morning, they were having a delicious breakfast of strawberries and mangoes. After they finished eating, Luna looked at Bethini. “Let’s go out and play,” she said.

They went to the park and started playing a game called ‘Say what you love.’

The game went on and the two girls were having fun when they saw the Mayor’s son storming towards them.

“You both stole the crystal!” he shouted. Luna and Bethini were shocked.

“Then prove it,” said the mayor’s son.

Luna and Bethini started searching for the crystal. Suddenly, they saw a dark figure running with the crystal. “The Black Ghost stole the crystal!” Bethini exclaimed. She wanted to stop the ghost, but Luna stopped her.

“No! Let us make a plan first,” she said. They went back home to have lunch and make a plan. As they ate their usual lunch of a vegetable salad and apples, they decided to follow the Black Ghost’s footsteps and get the crystal back.

“Good idea, Luna!” Bethini said. They set out and saw the Black Ghost’s footsteps on the ground. They followed it to a deep, dark cave. Luna saw something shining inside.

“Look!  It’s the crystal!” she exclaimed.

“Let us take it!” Bethini said and picked it up. As soon as she did, the Black Ghost appeared and snatched the crystal from them. Bethini started tickling the ghost, and Luna took the crystal back. She ran out of the cave, and Bethini followed her out.

They went to the Mayor and returned the crystal. The Mayor thanked the girls and they went back home. It was night, so they decided to have dinner—vegetable soup and watermelon.

The next day, Luna shouted. “Bethini! Look! The news says that the Mayor ran away with the crystal last night!” Bethini was shocked. They both went to the Mayor’s house, where everyone had gathered.

“We will take care of it,” said the police. Luna and Bethini wanted to help them, but couldn’t.

Later, they were playing in the park. “I want to know why the Mayor ran away with the crystal, and where he went,” Bethini said. Suddenly, a light shone on them, and they were flying!

“What is happening?” they wondered.

They finally landed in a magical school. Two ladies came to them. “Pureya?” one of them said, looking at Luna. “Oh, my daughter!” the woman hugged her.

The other woman hugged Bethini. “Oh, my Blossom!” she said.

Luna and Bethini, aka Pureya and Blossom, were shocked to find that the two ladies were their mothers and that they had magical powers.

“So I can purify anything by touching it?” Luna/Pureya asked. Her mother, Purienna nodded.

“And I can make plants grow?” Bethini/Blossom asked.

A figure landed in front of them. “The Black Ghost!” the two girls exclaimed. The ghost laughed.

“I am Hantsy. My mother is the Witch of Halloween,” she said. “Your mothers sent me down to earth so I could find you and bring you back to La La land,” she explained.

“We were so worried when you both fell on Earth!” Flora said.

“Now you are here, and we will never let you go!” Purienna said, hugging them.

Pureya and Blossom smiled. They were finally home!