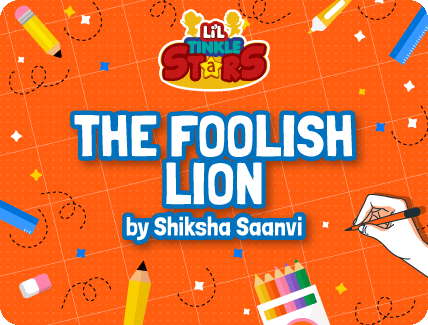 Once upon a time there was a very beautiful village on the edge of a forest. In that forest, there lived a lion.

The people of the village were very much afraid of the lion. One day, the lion got very hungry. He decided that he would go hunting in the village today.

He went to the village where he saw a hut nearby. A little light was coming out from the hut. Seeing the light, the lion felt that there must be someone here. He looked through the window, and saw a child who was crying very loudly. The lion was about to enter, when the mother of that child came there and started silencing her child.

The child’s mother was saying, “Please stop crying. If you will not stop, then the bear will come.” The child did not stop.

At this the lion began to think, ‘What kind of child is not afraid of the bear?” Then the mother said again, “Son, be quiet, the fox is standing outside, she will take you.” The child still did not stop.

The wonder of the lion was now increasing. The mother then said, “Son, be quiet, see, the lion has come to take you, he is peeping from behind the window.” Even then, the child did not stop.

The lion became very afraid of the boy and his mother. He started thinking, “How did they come to know that I am here? This child is not afraid of me either. Surely, it will be an elusive child.” Then his mother gave him a raisin and he immediately fell silent. Then her mother said, “Everything was your drama, you wanted raisins! Isn’t it?”

Now the lion got scared after hearing the name of the raisin and started thinking about who this raisin is! “May be it will be a more powerful animal than me. That’s why this child has become silent.” Then there was a loud sound and something fell near the lion. The lion sensed that the raisin had come to know about him and has come to kill him. The lion got very scared and immediately ran towards forest, going back to his cave without eating.