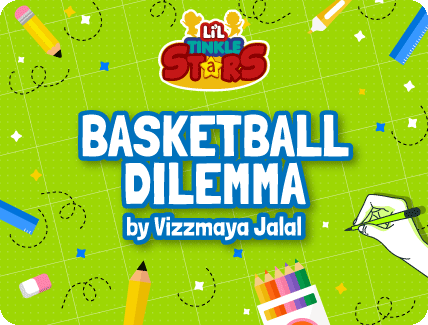 One day, Suppandi went to learn,
how to play basketball;
He enrolled himself and went to the coach,
Who was muscular and tall.

The coach taught the students how to dribble the ball,
As well as how to shoot through a basket;
Then he asked all of them to stand in line,
So that he can take their ability test.

Some could dribble,
While others could shoot through the basket too;
Then came, Suppandi’s turn and he started to throw,
small rubber balls, plastic balls and wooden balls too.

The coach was perplexed and asked him what he was doing,
He said he was solving the main problem with basketball since the beginning;
Instead of torturing the basket by shooting a big ball through it,
He was using small balls that could easily make it.

Showing off how great he was,
Suppandi told the coach, fuming with anger;
“If you want to learn more or have any doubts,
I give private tuitions too, Sir.

Now that I have solved
your basketball dilemma,
You can give me a prize or a diploma;”
The coach started banging his head on the wall,
Had he met anyone more foolish, he couldn’t recall.

Suppandi told the basketball coach,
“By banging your head, you won’t become as smart as me;”
The giant coach picked him up by his shirt’s collar,
and threw him as far as he could see.