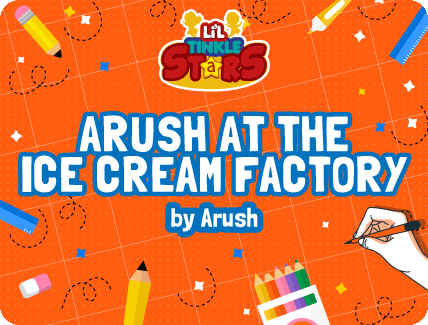 One day, Arush saw a car which he really liked. He told his uncle that he wanted to buy that car. His uncle told him he should work hard to earn money in order to do so.

Arush went to an ice cream factory to look for work. Arush didn’t know how to make ice cream, but since there weren’t any other applicants for the job, he was hired.

The factory owner taught him how to make strawberry ice cream using strawberry juice and vanilla. But the owner had a dark secret. In order to make the ice cream sweeter and brighter, they had been injecting artificial colour and flavour into it.

Arush was asked to go sell the ice cream. He went to a park and began calling out to people, “Buy strawberry ice cream! Specially made with artificial colours and flavours!” Hearing that, nobody bought any of his products.

When the owner heard this, he was very angry. He wanted to teach Arush a lesson and picked up a stick to hit him. But before he could do that, Arush grabbed a syringe filled with artificial colours and flavours, and injected it into the owner so that he would be sweet and not hurt him.

And that is how Arush spent a day working at the ice cream factory!