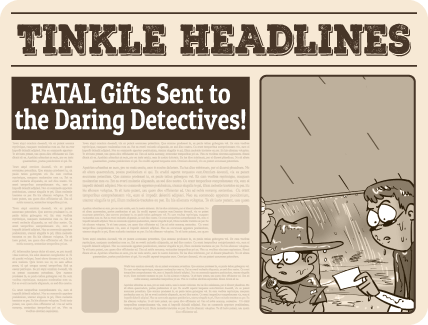 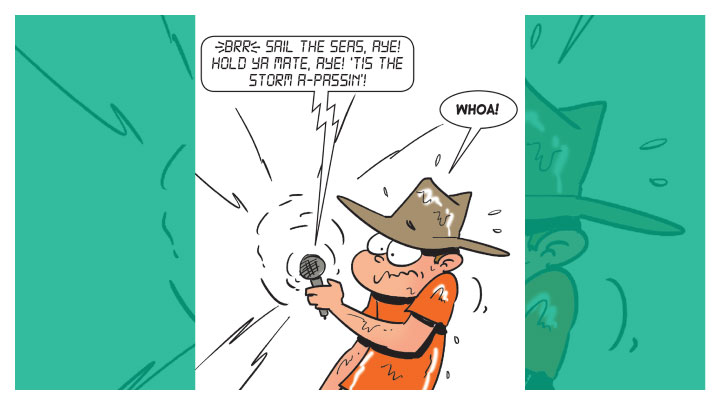 It has been reported that these gifts were actually fatal! We believe that an up-and-coming criminal in Tinkle Town is behind this. After all, the Daring Detectives are the most competent and brilliant sleuths in the area. Taking them out would give free rein to crime and destruction, and allow the criminal to carry out their operations in peace.

But the Daring Detectives are nothing if not brave. According to multiple bystanders, there was a confrontation between the mysterious criminal and the detectives. The latter were seen running across the town with the strange gadgets, screaming “DUNKUM TUNKUM!” This is believed to be a code name the criminal uses as a signature. As you know, this reporter does not rest until they get something resembling answers. So, they decided to speak to the young sleuths themselves. Ravi was very forthcoming with his thoughts, saying, “That evil conniver. Dunkum Tunkum has planned this for years! Years, I tell you! Decades! But no one can ruin the Daring Detectives. Not even my alien sister!” Saying so, he sprinted away, perhaps to work on his next case. Rahul, however, lagged behind, seemingly a little out of sorts and with something like a silly smile on his face. Perhaps he was in shock.

Who is this mysterious criminal? Will they bring doom to Tinkle Town? Will the town become the site of the greatest rivalry in the history of the known world? Is Samhita Pillai truly from outer space, and has she been the mastermind behind Dunkum Tunkum? Or worse, is she Dunkum Tunkum herself? When approached for an answer, Samhita simply greeted us with a resounding facepalm and slammed the door shut in our faces.

If you hunger for truth just like we do, read Tinkle 792 Week 4 and find out more!