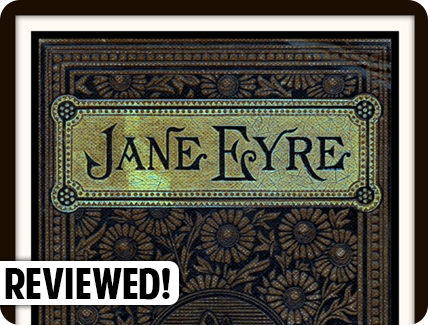 Nowadays most people associate classic books with a very unflattering adjective—boring. Most adults can understand and respect the importance of classics. However young people like us are not that easy to persuade, even though it is common knowledge that these classics are solid proof of books that never go out of fashion.

Jane Eyre is a story about an orphan. Jane’s parents died when she was too little to even remember them. Her uncle took care of her as long as he could but unfortunately, he died as well. Jane’s uncle made her aunt, Mrs. Read, promise to take good care of Jane. Unfortunately, Jane’s aunt did not keep her promise. She disliked Jane for being poor. Her children were always bullying Jane. When Jane was ten, she managed to get out of her aunt’s house and went to Lowood, a charity school. The school was directed by a very cruel man Mr. Broklehurst, who made his pupils face hunger, cold and punishment. Jane spent eight years at Lowood—six as a student and two as a teacher. After that, she put in an advertisement in the newspaper offering services to educate children. The only answer she received was from a place called Thorn Field but she jumped at the opportunity.

Her life at Thorn Field was great—she liked Mrs. Fairfax, the housekeeper, and her pupil, Adele, who became fond of her too. Jane also got to know Mr. Rochester and their friendship blossomed into love. On the eve of their wedding, a very terrible secret came out, tearing Jane away from everything she had ever known. What was the terrible secret? No, I won’t spoil the ending for you. You’ll have to read the book to find out!

Jane Eyre has inspired readers from around the globe with her will to survive on her own terms. This is a very good book. I liked it and hope you will like it too. After reading this book, the lesson I learned is to keep strong and keep fighting battles, because one day it will be worth it. So run to the market and grab your own copy!