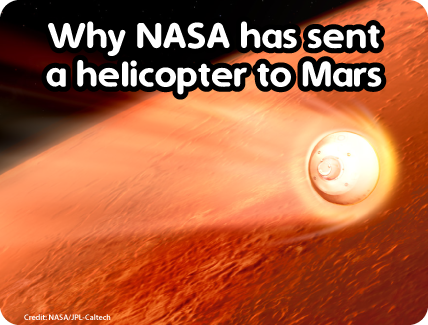 On 18 February 2021, NASA landed the Perseverance rover on Mars. On the belly of this rover, another robot hitched a ride to the red planet—Ingenuity. Ingenuity, however, is not your standard Mars-exploring robot. It is, in fact, a helicopter and the first of its kind to land on another planet.

But why is a helicopter on Mars?

The goal of Ingenuity is to demonstrate powered flight on Mars. The Martian atmosphere is extremely thin—it has a density (a measure of how compact something is) of less than one per cent of Earth’s atmosphere.

Can it even fly on Mars in such conditions?

This is why the helicopter is rather small and light. Its body is as large as a tissue box. It has a pair of lightweight rotors on top and four thin legs below. It can charge its batteries with solar power. All in all, it weighs only 1.8 kg. 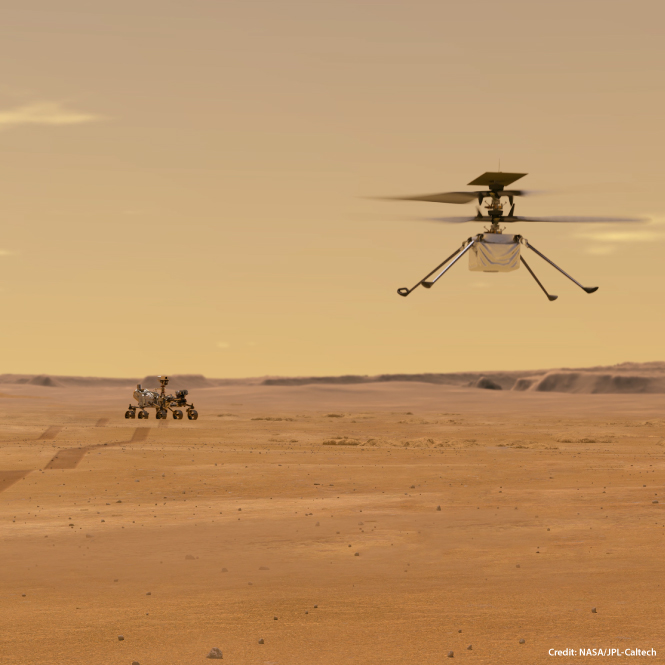 An illustration of Ingenuity flying on Mars. Credit: NASA/JPL-Caltech

What exactly is it going to do on Mars?

As soon as NASA finds a suitable landing spot or ‘helipad’ for Ingenuity, its mission begins. Over 30 Martian days (a Martian day, or sol, is about 40 minutes longer than the Earth day), Ingenuity will attempt at least three flights, though its total goal is five. The first flight will see the helicopter take off and hover a few metres above the ground for 20 to 30 seconds and then land. Achieving this itself in Mars’ thin atmosphere will be an achievement. Flights thereafter might go further distances at greater heights.

How much farther and how much higher can Ingenuity go?

Ingenuity could fly for up to 90 seconds for almost 300 metres at a time, at a height of 3 to 4.5 metres. That means it could travel nearly three times the length of a football pitch at a height of about 10 to 11 bowling pins stacked one on top of another.

How will it fly?

Flights will be made semi-independently. NASA scientists on Earth will create a flight plan, instructing Ingenuity to go to a certain point on Mars, covering some other locations on the way. Once this plan has been delivered to Ingenuity, it will take off and fly on its own to the destination, travelling through all the locations specified. If there are gusts of wind that might throw it off-course, it’s up to the helicopter to come back on track and arrive at the destination. It has sensors built into it that will help with navigation.

NASA’s Mars Helicopter, Ingenuity, arrives at Mars on Feb. 18, 2021. Its mission: to demonstrate the first powered flight on another planet. NASA/JPL-Caltech

After Ingenuity completes its mission of demonstrating flight, the Perseverance rover will continue its scientific mission of finding signs of life on Mars. NASA has plans for future missions that involve bigger helicopters that can do more work on the red planet than simply flying around. However, Ingenuity does have two cameras—one black-and-white, and one colour—so we can look forward to seeing fascinating images of Mars as this little helicopter zooms through an alien atmosphere.