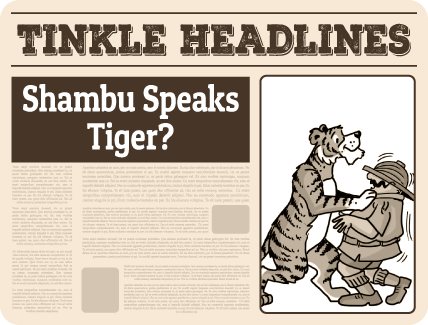 TINKLE TOWN: Shambu, the beloved animal conservationist, is known for his unwavering bravery.

The other day, Shambu was seen with a unique sidekick—a tigress! Yes, the brave Shambu has now seemingly partnered up with a big cat and will perhaps be rescuing other animals along with her. He seems to have met his now-sidekick in the jungle, where he was enjoying his lunch. A little bird told us that the two seem to have built quite the rapport, wandering the jungle together on Shambu’s newest adventure. This kind of equation can only be achieved one way—we believe that Shambu knows how to talk to and understand tigers! 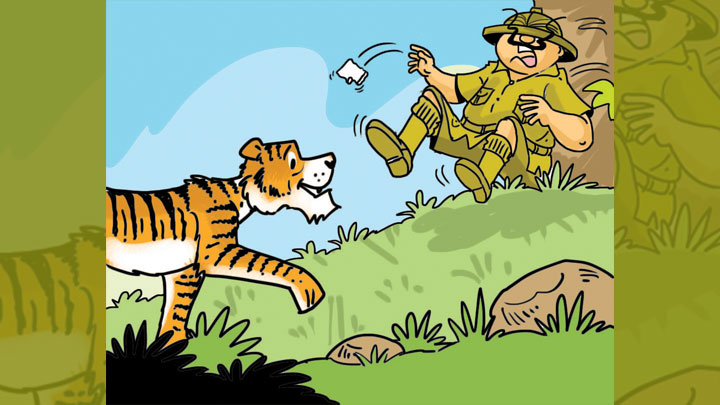 When this reporter approached Shambu, they did so in order to get a comment from the tigress herself. Since Shambu is now believed to be something of a tiger whisperer, only he would be able to translate her growls. Shambu said, “Lucy just wanted to play. She was scar—sorry—hungry too.” But this reporter did not rest at that, and approached Shanti. Shanti also claimed that the tigress was not Shambu’s sidekick, but just a tigress he was asked to bring to safety. It makes sense that Shambu and people around him are keeping his new partnership under wraps, seeing that his tiger-language skills might otherwise be in high demand.

But if you also want to get to the truth of the matter, find out more about Shambu and the majestic Lucy’s adventure in Tinkle 790 Week 4.