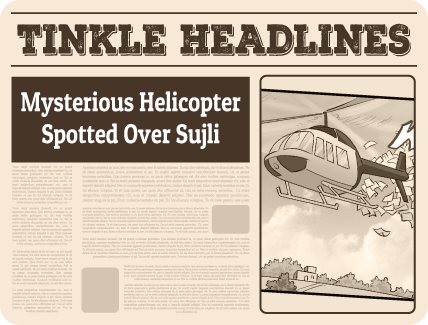 SUJLI: An unmarked and unidentifiable helicopter has been spotted flying over Sujli, ringing alarm bells in this peaceful little kingdom. “Citizens aren’t allowed to own helicopters in Sujli,” says one Sujlian. “Only Supreme Leader Sooja is allowed to own them.”

But there has been more cause for concern. This mysterious helicopter has been dropping pamphlets all over the kingdom. “Sooja will be overthrown today,” they say. “Wh-who is writing such things?!” says another Sujlian, panicked and worried. “Such talk is illegal here! The maker of these pamphlets will be given the strictest and toughest punishment we have!” Word on the street is that this mischief has been created by Santri and his rebels. “Santri will soon get rid of that tyrant Sooja and establish a more fair and just Sujli,” says one of our informers from inside the rebellion. “Sooja must go! And there’s no better time than the present.” Is overthrowing the Supreme Leader that easy? “Haha! Not a chance!” says an advisor to Supreme Leader Sooja. “The Supreme Leader is protected by very robust security. Besides, the people of Sujli wouldn’t go along with this. They love him too much. This private helicopter will be captured and those behind it will be punished severely!” 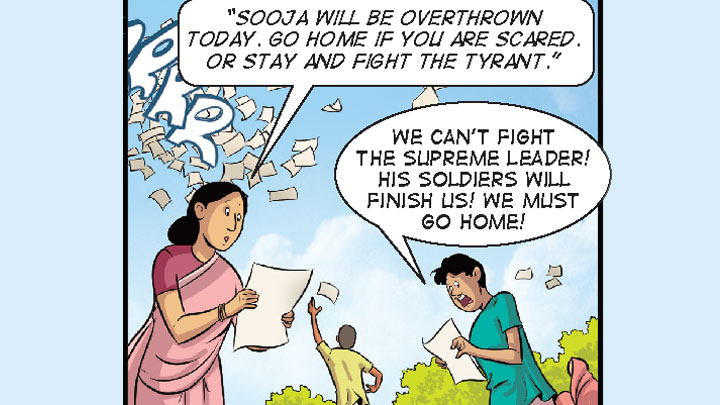 Our message to whoever is trying to launch a revolution in Sujli—Give up now. Resistance is futile. Read the full story in Tinkle 788 Week 1.