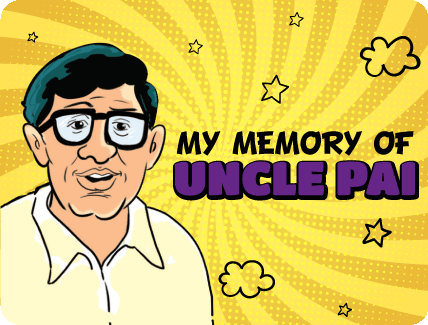 On Uncle Pai Day, let’s hear from a few Tinkle team members about their memories of Uncle Pai. 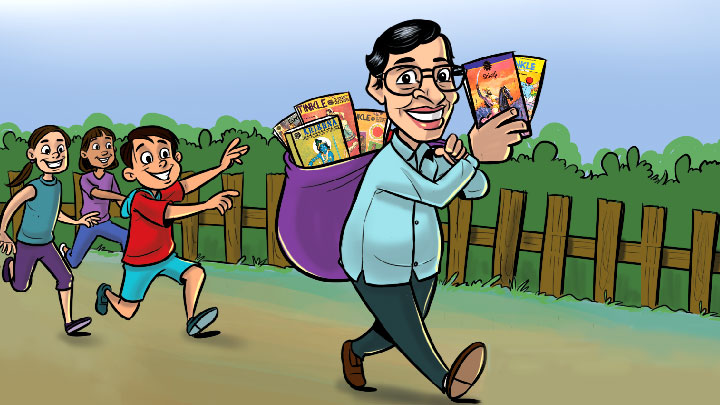 My job back in the day was, in fact, as a copywriter! I used to freelance as an artist for Tinkle. It was Uncle Pai who asked me if I wanted to write or draw for the magazine. I chose to illustrate. And then, one New Year’s Day, Uncle Pai offered me a job as an artist and welcomed me to the Tinkle team! Ever since, I’ve considered this job a gift. It was Uncle Pai who encouraged me even though I wasn’t a trained artist. From there my career took off, and here I am!

My memories of Uncle Pai go back to when I was a little girl. Actually, from the time I was born! Uncle Pai was my father’s friend. Back then, I didn’t know him as the Uncle Pai, but as my father’s close friend. It was fun having him around and he was a very nice person. Thanks to him, I am here today! I started out as an illustrator for Suppandi at Tinkle. He always encouraged me and never said anything negative about my art. That gave me a lot of confidence to draw and got me where I am today!

I joined the company in 1995, but I had known Uncle Pai since 1985, when there was a printing press in the Tinkle office. My friend used to work there so I became friends with Uncle Pai then. We used to meet and talk a lot. He spoke Konkani and he loved Konkani food. In the afternoons, he would share his stories about Amar Chitra Katha and Tinkle. I remember that Uncle Pai had a policy when I worked for him that we must finish all our work in eight hours. He didn’t want us to work from 8 a.m. till 8 p.m.!

Uncle Pai was my student! Once, Mr. Chandrakant Rane,—the art director at the time, called me and said that an uncle wanted to learn how to use the computer. I thought I had to teach one of Mr. Rane’s uncles. I came to the office and was sent to Uncle Pai’s cabin. That was when I learnt that I had to teach him! I taught him how to use the computer for two months. It was a fun experience. When I went to his house for the first time, he offered a plate of aloo vada as breakfast. He always had a plate of vada ready whenever I went to his house. I remember when he paid me for the computer lessons, he took a written acknowledgement from me that I had received the money. Then he said, “Don’t tell Lallo.” When I asked who Lallo was, he said, “My wife!” Initially, Mr. Rane had scared me by saying that Uncle Pai was very strict when it came to work, but it was not like that; he was very friendly and it was fun.