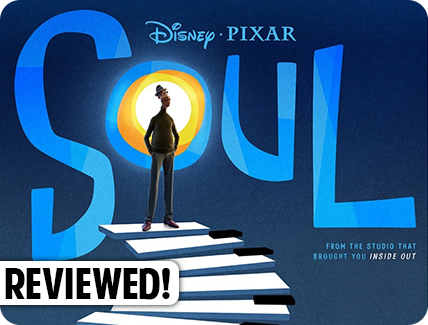 Let me tell you a secret about me. I absolutely love Pixar movies. I have watched every single one of them at least three times each. Which is why I was very excited that Pixar had a new movie coming out during the Christmas season. The excitement was absolutely worth it. It’s not often you come across a movie that leaves you feeling hopeful even after discussing something as depressing as death. Soul is a beautiful film that talks about the purpose of life, what comes before it and what comes after.

This wonderful piece of animation has two lead characters—Joe Gardner, a music teacher who has dreams of making it big as a jazz musician, and 22, a cheeky ‘baby’ soul who has never experienced life on Earth and doesn’t think much of it, at least at the start of the movie.

What I loved about Pixar’s Inside Out was how the story managed to explain confusing emotions and feelings by giving an actual voice to the feelings inside the lead character’s head. Pixar continues that in this film, by giving the soul a voice. The movie starts with Joe at a crossroad in his life. On one hand, his mother wants him to continue at his job as a music teacher at a middle school because of the stability it will provide him career-wise. On the other, Joe’s dream and passion has always been to play jazz professionally. When Joe gets a chance to play with jazz star Dorothea Williams, he takes a chance and heads out to make his dream come true. Unfortunately for Joe, he meets with an accident on the way and his soul ends up in the Great Beyond, the movie’s version of the afterlife.

Joe cannot believe that his life ended just when he got his big break, and somehow escapes the Great Beyond only to land in the Great Before, a place where new souls are given personalities and sent to Earth as babies to lead full lives. It is in the Great Before that Joe meets 22 who has no intention of going to Earth because she feels it’s not right for her. Joe plots to get his soul back to his body with the help of 22, but of course, like all great plans, this too goes completely haywire, and leads to both souls doing some serious ‘soul-searching’.

I loved how the movie explained ideas like ‘being in the zone’. When people are ‘in the zone’, they tend to be 100 per cent focused on the task at hand; it could be a performance, an athletic endeavour or even cooking. In the movie, the ‘zone’ is like a bubble where the soul is completely focused on a specific activity, totally undistracted. It also looks at how being ‘in the zone’ too long can cut you off from your loved ones and bog you down. Interestingly, having no passion or drive can do the same to your soul as well. It is all about the right balance, about appreciating the little things in life that make life worth living.

There are also some very interesting characters the movie introduces, such as the soul counsellors in the Great Before who are all called Jerry, and their numbers person Terry who is responsible for making sure every soul is accounted for and knows Joe doesn’t belong in the Great Before. I also loved the character of Moonwind who is among the few living humans who can travel between the soul world and Earth.

All in all, while Soul falls short of being one of Pixar’s best films ever, it is a worthy entry in Pixar’s library. That doesn’t mean Soul is not a good film, it’s a great film. It’s just not on the level of other Pixar classics like Toy Story or Inside Out. Having said that, Soul highlights why Pixar is the best at making animated films today. After all, nobody else puts as much as ‘soul’ into their films like Pixar does. Now if you’ll excuse me, I have to watch Soul at least two more times!

As of 6 February 2021, Soul is streaming on Disney+ Hotstar.