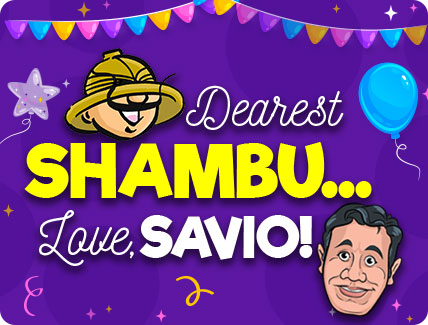 My first impressions of you as a bungling forest ranger have been hilarious ones and I do not think I can ever forget them. 10-year-old me was fascinated by the art, and the funny details in the scenes had me in splits. What made you so special to me, Shambu, was the lucidity with which Mr. Vasant Halbe created your world. He drew you and your friends with such ease and panache that no one else could ever match. These panels, drawn in his signature art style, are some of my favourite ones.

Some of the elements in Mr. Halbe’s artwork really left a mark on me. I loved how he used silhouettes in open panels. His addition of little birds and animals to the art showcased his keen eye for detail. The funniest was his subtle use of fake trophies that have a life of their own, reacting to what’s happening in the scene.

So, Shambu, when Uncle Pai informed me I would have to illustrate your adventures once Mr. Halbe retired, I was completely taken by surprise. But Uncle Pai said, “Don’t worry, Savio, you will be able to do it!” Those reassuring words inspired me to start working on your sketches. After a month or so, when Mr. Halbe came to the office for his farewell, he told me that I was illustrating you just fine and that I would get the hang of you very soon. It’s been 23 years since and I still wonder if I have done justice to the legacy that was handed down to me.

The Little Shambu series was a fun extension of your character by Reena I. Puri, the then Associate Editor of Tinkle. We were delighted to dive headfirst into your childhood adventures, even though it was a huge challenge in terms of the art and the storyline. We had to be mindful to preserve the nuances of your character. The very first episode of Little Shambu was about how you met Shanti. It is in the episode that your respective furry friends, Kittu the cat and Dum Dum the dog, were introduced to each other.

Shambu, over the years, you have evolved with the times and your lean physique has taken a more rotund shape. You no longer carry a gun, choosing instead to brave it all with your charming antics. As a wildlife enthusiast, you have taken up the role of a conservationist and photographer. You sometimes have to confront your arch-nemesis, a villainous poacher named Toxica, while being cheered on by that huge fan of yours, the mountain of a man named Shaurya. In the last couple of years, it has been fun covering the very exciting globetrotting adventures that Shanti and you have been on. I hear from some very reliable sources in the animal world that the two of you will be heading back home soon. Psst! I also overheard a little squirrel telling a golden oriole on the Jamun tree, “The writers are up to something mysterious.”

So, my dear Shambu, hold on to your hat and watch your back because you have a bunch of roller-coaster adventures coming your way!

Your friend and artist,
Savio Mascarenhas